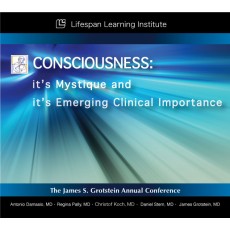 "Ever since Freud uncovered the unconscious, it has been the hallowed domain of psychoanalytic conceptualization in the continuing workplace of psychoanalytic. This program focuses on counterbalance to that point of view.Consciousness, the once less prominent counterpart to the unconscious, is recently being accorded the same interest that Freud once accorded to the unconscious. Cognitive and neuroscience studies are now alerting us to what may be called the uniqueness and the mystique of consciousness, an entity which we have taken too much for granted in the past. Presentations cover convincing evidence of its intrinsic nature from the neuroscience perspective. Dr. Daniel Stern, the infant developmentalist, presents a new form of ontological psychotherapy whose foundation is consciousness. Dr. James Grotstein integrates all the presentations with a psychoanalytic perspective."

1. Describe the intrinsic nature from the neuroscience perspective.

2. Explain the phenomenological concept of psychotherapy.

3. List 3 ways psychotherapists can integrate consciousness into their practice.