Adult Attachment and the AAI 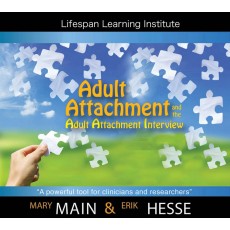 Attachment theory was originated by John Bowlby, a psychoanalyst who felt that crucial patterns were established in the early bonds between child and parent, especially with the mother. Following the lead of Bowlby, Research Psychologists, Drs. Mary Main and Erik Hesse of UC Berkeley have bridged the gap between infant observation and inferences about the mind of the infant, to the actual measurements as representational states in the mind of the adults.

Mary Main, Professor of Psychology at the University of California, Berkeley, is the preeminent student of attachment today. With Erik Hesse she developed the Adult Attachment Interview, a sophisticated coding system for classifying attachment types beyond childhood. A similar typology has emerged to that of the strange situation studies, and a wide variety of research studies have been done using both techniques. Drs. Main and Hesse will present the basics of attachment theory, followed by the findings of their more recent research and the contemporary state of the theory.

Upon completion, the listener will be able to:

Attachment from Early Childhood through the Lifespan